I am tickled to share today’s post! I have always wanted to go visit Europe. A few years ago my husband started working for a Belgian company and has to travel overseas once or twice a year for meetings. This past June I was able to go with him! We extended our stay by a couple of days so we could spend a little time together exploring. Our first stop, PARIS FRANCE! France is right next to Belgium and Paris is just a 3 hour drive away from where we had to go for my husband’s meetings. We decided to take an overnight flight from New York City right into Paris. We would have about 24 hours to explore Paris. So today I would like to share with you A Day In Paris France!

I tried to get some sleep on the plane so I would not be overly exhausted when we arrived. It wasn’t easy. I have a hard enough time getting a good night’s sleep in my bed at home, much less squished up in an airplane seat. I did manage to doze a bit. As we began our final descend into Charles de Gaulle Airport in Paris I started to wake up. I looked out the window like an excited little girl on Christmas morning!

We arrived safe and sound, rented our little red car and headed to our hotel. We learned rather quickly the French word for Exit was Sortie. All I can say is Thank Goodness for Google Maps! While sitting in the car, wide awake, I kept thinking over and over, “I am in France! I am in Paris, France! I can’t believe it!”

As we approached Paris it looked like any other large city in the U.S. There was graffiti on the side of the road. 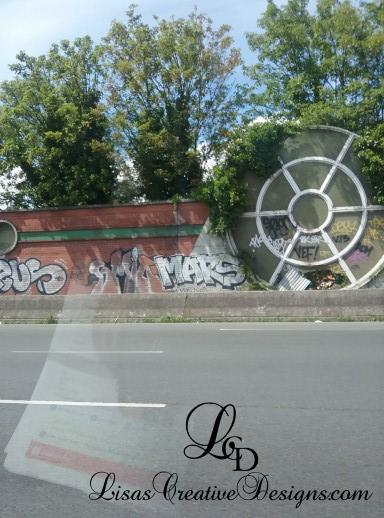 Panhandlers in the street were going from car to car begging for money when the traffic slowed to a crawl. To be honest, I was not really impressed…YET! I am a country girl after all! The grime, crime, congestion, noise and lack of greenery really is not for me. Cities are a fun place to visit but I couldn’t live in one. But. That’s just me!

As we got further into the city Paris began to show her undeniable beauty and old world charm. 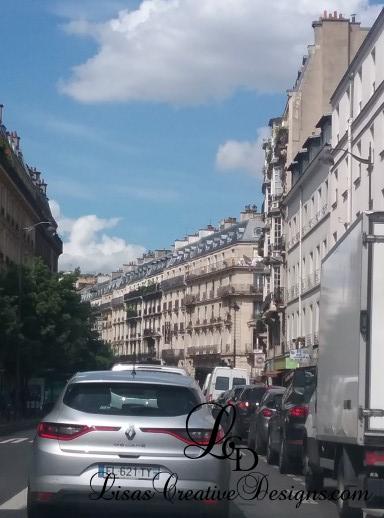 This next photo was taken near our hotel in Montmartre Paris. I was in awe of the charm and old world feel of the architecture. It was so pretty! 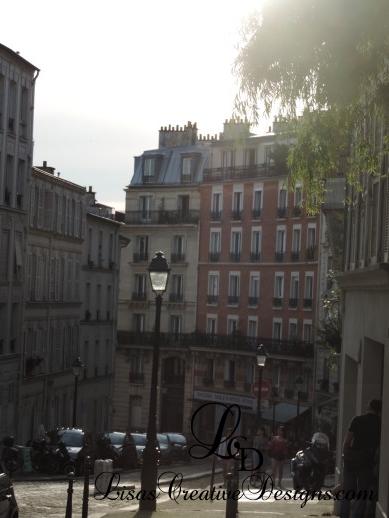 Known for it’s artistic history, Montmartre sits on a hill in the northern part of the city. Many famous artists had their studios here including Claude Monet, Vincent van Gogh and Pablo Picasso! We stayed at Hotel des Arts on the hill in Montmartre. Built in 1901 this small hotel was cozy and charming. 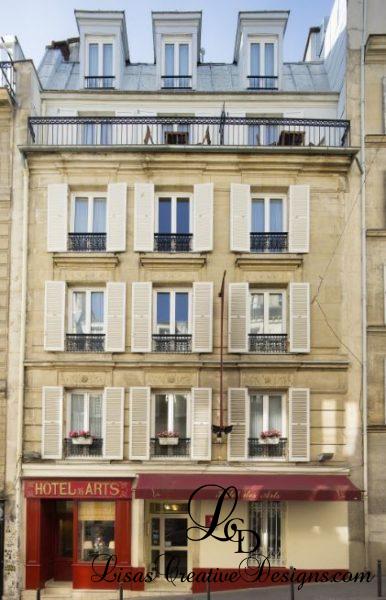 The room was small but very comfortable and the bathroom was very tiny. Something we are not used to in the States. Overall I liked this hotel very much!

Speaking of TINY, check out this lift/elevator! Try fitting two adults and all their luggage in there! It was no bigger than a linen closet. According to Rick Steves, tiny elevators are the norm in Paris. Hmmm. You learn something new every day. 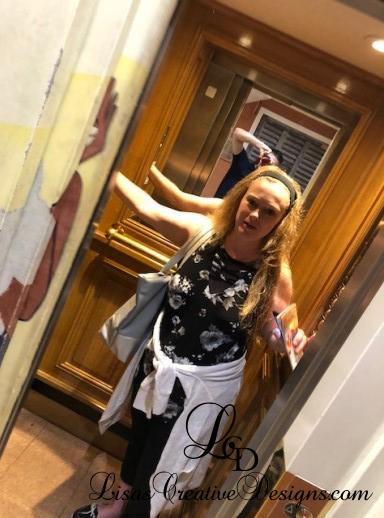 Being that this was my first time in Paris and we only had one night to enjoy this glorious city before moving on to Belgium I just HAD to see the Eiffel tower! I mean, I have so many Eiffel tower and Paris themed decor in my home I thought it was only fitting to see the real one with my own eyes! I did more than just see it. I touched it. Climbed it and reveled in the experience with a few lessons learned.

Instead of attempting to navigate our way there in our rental car we decided to rent an Uber. The driver was there in a few minutes and it made life so much easier. I got to sit back and enjoy the ride. I was practically hanging out the window like a dog on a Sunday drive. I wanted to see everything I could and remember it all. As far as remembering EVERYTHING. Well, let’s just say it is a good thing camera’s were invented. 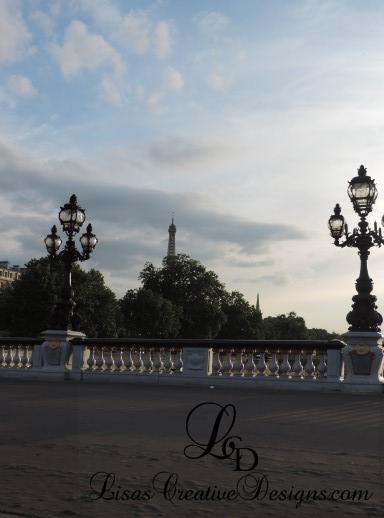 The Uber driver dropped us off around the corner from the Eiffel Tower and we walked the rest of the way. 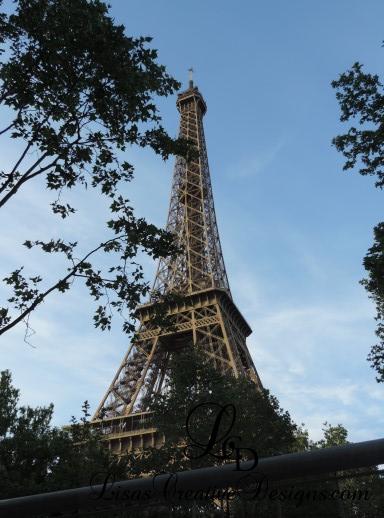 I couldn’t believe how HUGE it was in real life! 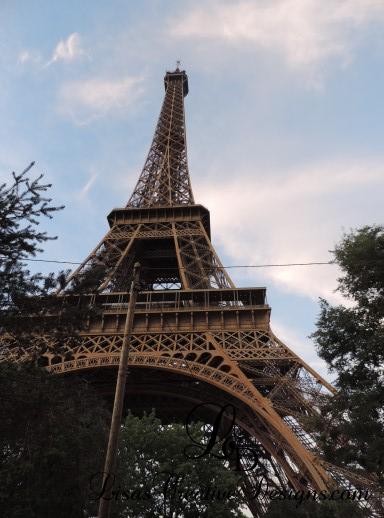 I have been to the Eiffel Tower in Vegas and it is much smaller than the REAL one. It was massive. I hadn’t booked a ticket to ride the lift to the top online just in case our flight got messed up and we weren’t able to go. The line at the gate for lift tickets was really long so we bought tickets to WALK up to the second floor. OMG! That’s when I found out how large it really was. As a Fibromyalgia patient I thought I was going to keel over on the way up. I had to stop a few times huffing and puffing. 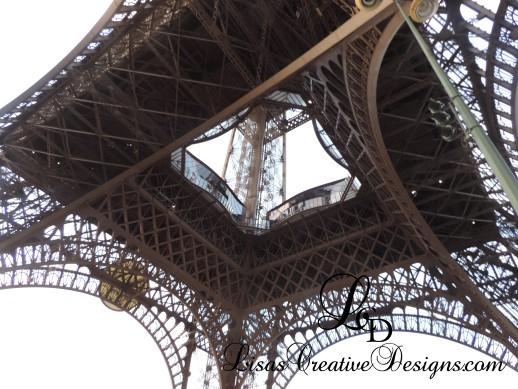 300+ steps later and with legs now made of rubber, we made it to the first level. Yay! After taking a breather we walked around taking in all of the beautiful surroundings. We also watched a few other walkers ascend from the stairs moaning and groaning which made me not feel so bad. They were younger than me too. Lol. At 190 feet above ground level the view of the city from the first level was spectacular. There are also a few shops and museum style tidbits of information on the first level to enjoy. 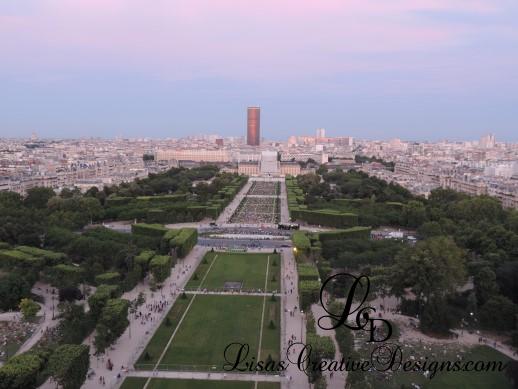 I looked up to the second level from where we stood and it looked to be miles away. I told my husband, “No way José!” I was content staying right where I was. We arrived just before dusk and we enjoyed watching the sunset fall upon the city. 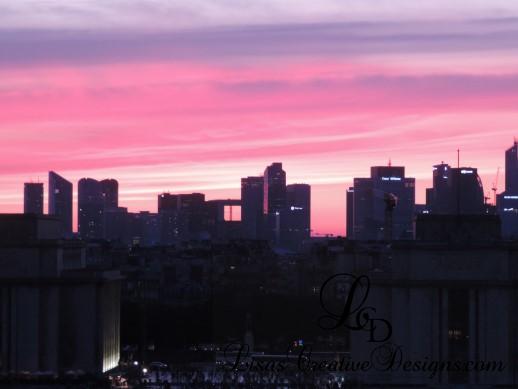 After soaking it all in we took the lift/elevator down. It took me by surprise a bit at first because you go down on an angle. The elevators travel up and down the Eiffel Tower’s legs. That was interesting. When we got to the bottom and started heading out it was now pretty dark and the tower was all lit up. It was just beautiful! Every hour on the hour it also sparkles with blinking lights for 5 minutes!!! 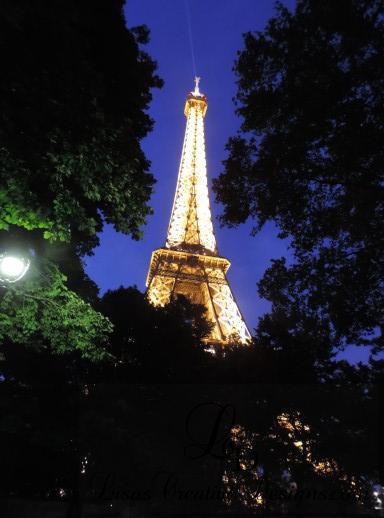 Exhausted from our journey, we headed back to our quaint Parisian hotel and went to bed to the sounds of the city. There was no air conditioning. If there was it wasn’t on and the window was open. I noticed rather quickly that the windows in Europe have no screens. At least I did not see them on any of the buildings. As I watched bugs whizzing by in moonlight, I drifted off to dreamland.

The next morning we found a cute outdoor cafe in walking distance from the hotel. I enjoyed a delicious mocha coffee. 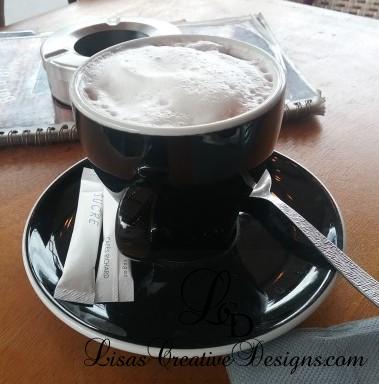 And a hearty breakfast of delicious croissants, breads, eggs bacon and jam. 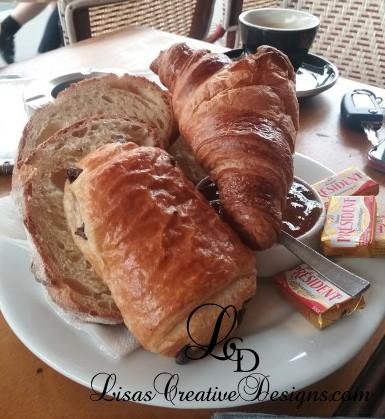 On the walk back to the hotel I couldn’t help but notice a beautiful historic cemetery. I don’t know why but I LOVE old cemeteries and ghost stories. Dating back to the early 19th century the Cimetière de Montmartre was so peaceful and beautiful. It was a lovely way to end a one day stay in Paris, France. 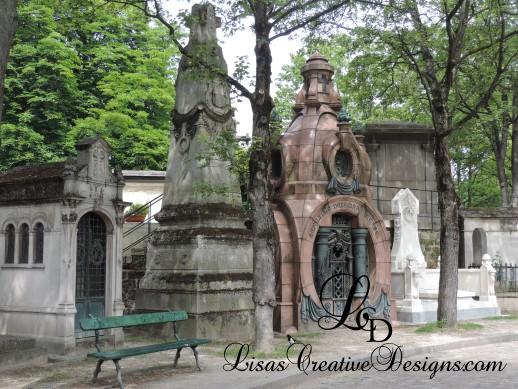 Well that sums up my first visit to Paris, France. Next Stop. Kortrijk, Belgium here we come!

I hope you have enjoyed this post about how I spent a day in Paris. It was a dream come true. I REALLY hope to to take another trip in the near future. I hope to see more of Paris and explore much, much more of Europe in my lifetime.

These photos and more can be found on my pinterest board My Travels To Europe. Please feel free to wander over and please follow my board as I will be adding new photos as we go along.

Thanks so much for visiting today!

Subscribe to Lisa’s Blog via email and never miss a post! Learn how to decorate on a budget creatively, get crafty ideas and be inspired to tackle your own design projects! 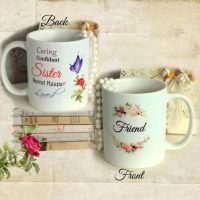 Let a special friend know how much they mean to you by giving them a beautiful, custom printed Friend gift mug found only here at Lisa's.
not rated $16.50 – $18.50 Select options 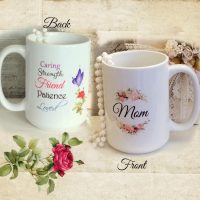 Let Mom know how special she is with a beautiful, heartwarming Mom coffee mug. This sentimental coffee cup would make a wonderful Mother's Day, Christmas or Birthday gift for Mom. This design is only found here at Lisa's!
not rated $16.50 – $18.50 Select options 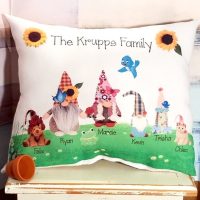 This adorable personalized Nordic garden gnome family gift pillow would look great in a garden inspired room, screened in porch or entryway. They make a wonderful housewarming gifts too!
not rated $39.50 Add to cart 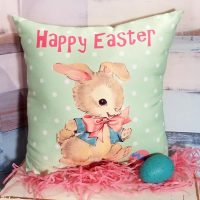 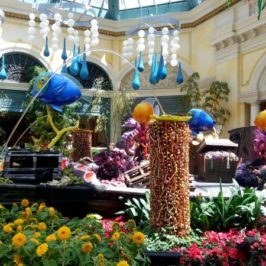 See Las Vegas through the eyes of a decorator. Come tour the Bellagio Conservatory and... 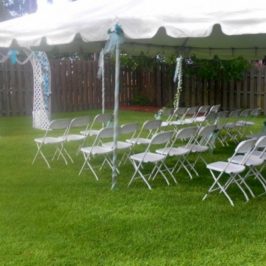 Decorating for a summer wedding outdoors doesn't have to be elaborate or expensive to be... 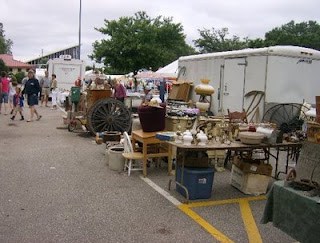 Awhile back I read about the Raleigh Fairgrounds Flea Market in Country Living Magazine. It... 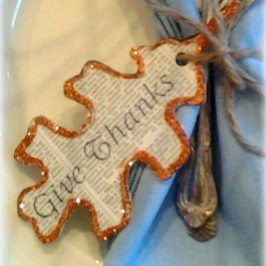 After traveling over 13 hours and sitting in traffic for what seemed like an eternity... 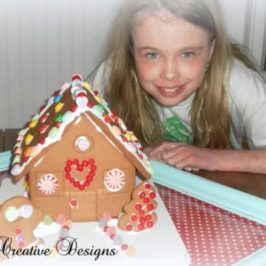 Today I want to share a fun project I did with my daughter over the... 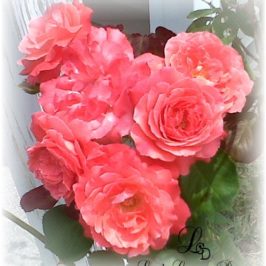 Hello Blogland Friends, Happy Mother’s Day to all you Moms out there 🙂 Take a... 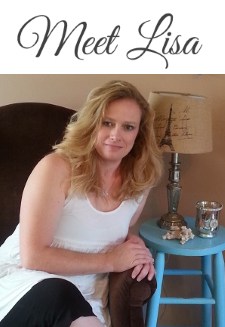 We use cookies to ensure that we give you the best experience on our website. If you continue to use this site we will assume that you are happy with it and consent to our use of cookies.Ok